Where does Jake Delling Le Bas come from? I heard you were from Ireland?
Jake: Well I was born here in the U.S.A and lived here until I was 8 years old. But after that my family moved over to Ireland and that’s where I spent some very important years of my life almost 14 years in total. So I grew up in the west of Ireland and that’s where I really feel like I come from. But it is nice to be back living here in the states again.

Who was it that  introduced you to music?
Jake: That one for me is a really tough question I don’t really have a single person who one day showed me some music and it changed my life forever. I just have memories of very pivotal moments over the years when different people have shown me different things that really changed my music listening. Between my Mother, friends in school, some friends of my Dad and who knows who else a lot of people have helped me through the years.

What kind of music was your earliest memories?
Jake: But if your asking what kind of music it was I do have a very early memory of my Mother giving me the Pearl Jam album Ten when I was around 11 or 12. I don’t even think she listened to Pearl Jam I think she just found it one day and gave it to me. But that was a pretty big deal that got me started more than anything I ever listened too before that.

Were you interested in other instruments? How did you find your way to the drum kit?
Jake: I always wanted to play an instrument since I can remember. We always had guitars and things around the house because my Dad plays a little bit. I even got given a bright white electric guitar of some random make when I was really young that sat around for years. I tried learning it a little bit as I grew up but the guitar never really drew me in. And then in school I had some friends that wanted to start a band but they had no drummer. And I will never forget my friend Owen said to me one day ” Man if you started playing drums it would really help me out” I always liked the drums and that was the reason to just go and do it. So I was 13 or 14 when I got my first kit and never looked back after that. It was a great decision as far as I’m concerned!!

I have seen some drummers out there playing some massive kits. Some of them are so big you lose the drummer in them.  One of the things I love about you is the fact you play a small kit. Why do you do so? 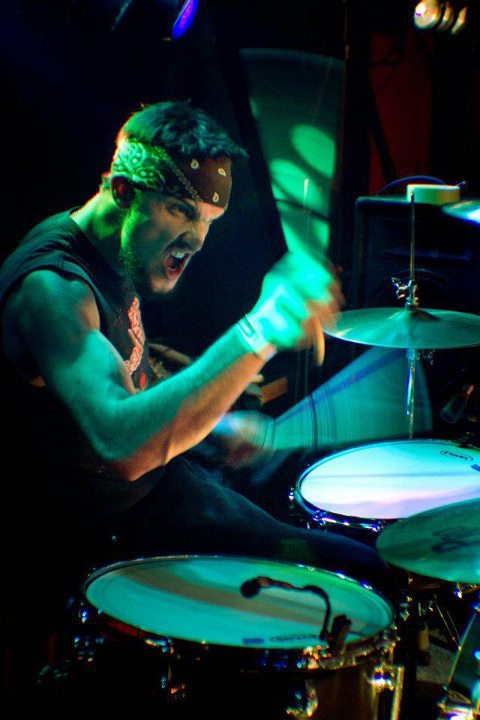 Jake: A philosophy I have always loved in that simple is better. And that same thing applies to my drums. Growing up I was a huge punk fan and I still am but one of the things about punk is simplicity and no bullshit. That’s what I do with my drums I don’t see any reason to have 50 drums and 80 cymbals. For some guys a giant kit works and some guys make it work. But at the same time some don’t! I just figure if you can’t do what you need to with a very minimal set up then you have no business using a complicated set up. So I just like to keep it simple and make the most out of a small set up.

I have to ask you about this.  Who gave you the nickname “Irish Thunder”?
Jake: Well that one came from a man you know, Mr. Adam Joad or the Appalachian Apostle as he is known. Adam is quite the man for nick names I think he loves giving them out. I was barely in the band before he slapped the nick name Irish Thunder on me. It’s a good one though I’ll take that all day long.

I love sharing new music with friends that I know will appreciate it. One of those bands is “Ghost”,  I know you enjoy the band  how come?
Jake: So many reasons!! I have you to thank for giving me that CD that one was in my ears everyday for a few months after I got that. But what they do is so awesome to me. They want to sing about the devil but do it in the catchiest way possible with awesome riffs, you can’t beat that. And the whole hiding the identity thing is a nice touch. They are just a great band doing something different, its awesome.

Besides “Ghost”, what other new music are you listening to?
Jake: I go through a kinds of different phases of different music. Lately its been a lot of bluegrass a band called Split Lip Rayfield I’ve been listening to a lot lately. My boys in Gypsyhawk just released their new album so I’ve been rocking that one, those dudes rule. I just came across a band recently called Larry and His Flask its some pretty cool stuff worth checking out.

Your fan base are called  “Hell Riders”  what does that mean to you?
Jake: The Hell Riders are why we do what we do. When we first started going out there and touring and really showing people who Scattered Hamlet are the response we got from people meant everything to us. And then Hell Rider chapters starting popping up around the country it was amazing for us and now we meet people who are proud to call themselves Hell Riders. And that for me is incredible. To have people who connect with your music that much and take pride in being a part of it I can’t ask for anything more. Hell Riders for me make me want to go out on the road as often as I can to meet every one of them. Hell Riders!!!!

If you were asked to contribute to a book on the music industry, what advice would you give to a new musician?
Jake: PRACTICE! That’s the biggest thing you have to practice your instrument if you ever want to do anything. Practice often and practice hard. Also go out and play with people don’t sit in you garage and be too afraid to go out and play with people you learn more playing with other people than you ever will sitting at home alone. And lastly if you think this is something you really want to do then prepare yourself for sacrifice it takes a lot of sacrifice. But also prepare yourself for fun I wouldn’t trade this for anything else.

I have heard some “interesting” music coming from the “Hell Rider” van, what’s other  surprises  would I hear if I looked through your musical selection?
Jake: Haha that’s a scary question probably lots of things! As music fans we all love a lot of things, things we wouldn’t expect. Me I have no problem bustin out Lionel Ritchie’s greatest hits anyone who disagrees can suck it. Hulk Hogan and his Wrestling Boot Band is another favourite to listen to on the road. I even have some good old Limp Bizkit on there but that’s mostly there because myself and Adam like to listen to it on the road and break down how lyrically retarded Fred Durst really is. If you didn’t know he is very retarded. It helps pass the time while we drive.

Given the current state of flux it’s in what do you think of the music industry these day?
Jake: That’s the big Question for a lot of people these days. It’s a tough place out there for a band a REAL band that is, it’s an extremely tough place. I was at a music festival last weekend and there were many different kinds of music there but one thing that drove me crazy is that on a huge stage in front of thousands of people there were 2 guys up there one using a DJ setup and another barely playing drums. It was horrible, the dude was just singing using autotune. But people were loving it!!! Going crazy for it! Even though there was not much real talent being used up there. So that’s what REAL bands have to compete with now and its a sad state of affairs. Technology is replacing talent its disgraceful. But the thing I always remember is that if I still love real music and REAL bands then there are others out there too. People like Hell Riders and all real music fans as long as these people are out there the REAL bands will always have a chance it just takes some damn hard work. Oh and talent although for some people the talent part isn’t necessary if you have autotune haha!

Check out the talented Jake Delling Le Bas in the band Scattered Hamlet!