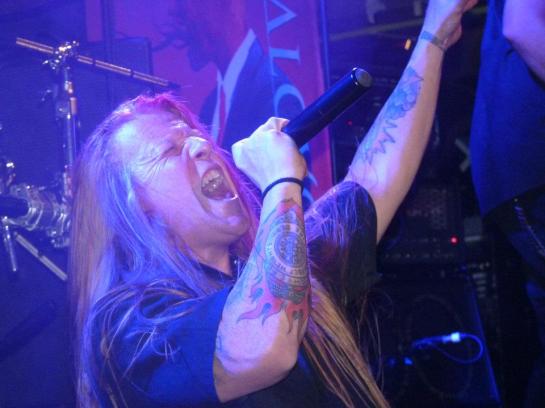 Halcyon Way vocalist Steve Braun answered some questions for us. Let’s get to know about him and his band Halcyon Way.

Thanks for speaking with us Steve. Can you tell us a little about your self and where you come from?

Steve:  Hmmmm that could be a very deep questions,lol. I am the lead singer for Nightmare/ Sony Red recording artist Halcyon Way. We are a metal band based out of Atlanta, GA. I am a Jersey boy born and raised. I have lived all over the US and Canada following my dreams. I now live in Nashville, TN which is funny that I now drive 4 1/2hrs to band practice but you gotta do what you gotta do.

There was always music of some kind being played in my house while I was growing up. How did music come into your life? What kind of music shaped you as a kid?

Steve:  I really got into music at a young age. My older sister use to baby-sit me when my parents were out. I remember the first stuff I listened to was Meat Loaf, Billy Joel, Pat Benatar and Hall and Oats. I was instantly hooked. Tho it wasn’t Metal I believe it really helped to set the foundation of loving strong songwriting and melody.

Most everyone dreams of being a rock star but these dreams remained unrealized. How did you make your dreams come true?

Steve:  Man…all I can say is it took a lot of handwork. Countless hours of practice singing to my favorite tapes…yes tapes:) I also took private voice lessons in NY, LA and Nashville. I was even a vocal performance major in college.

On making my dreams come true…I’m still in that phase. You have to knock on as many doors as possible. I believe if you continue to knock on doors sooner or later the right door will open. Sitting in your bedroom hoping it will happen will NOT make it happen.

What were some of the experiences you had that led to you to where you are today?

Steve:  I have been quite blessed in the experiences I’ve had in the music industry. My first break was singing for Word Records recording artist Siloam. We were an anti-drug hard rock band. We toured all over the US and Canada.

I’ve sung on the TV show “The View”. I actually got engaged on the show. I am the only one to ever make Barbara Walters cry on tv. I mean now I can die a happy man:)

I have been fortunate enough to tour all over the world and meet some of the most amazing people along the way.

Most musicians “earn their stripes” in several bands prior to success. What were some of your more memorable experiences in some of your earlier bands?

Steve:  Well in Siloam we were on CNN when we were in Corpus Christi, TX and we were honored by the mayor. However, one of the biggest memories was that we played in this boys n girls club and as soon as the lights went down for the intro and gang fight broke out and the head of a porcelain duck whipped past my head (I still have the duck head:))

One of the greatest things playing with ASHENT was I got to spend a lot of time in Italy. I would sometimes spend up to a month at a time there when recording our albums. The best part was I got to live like a local.

In talking to people about music, most of them identify with a certain era of music more than others. What period of music do you identify most with?

Steve:  I would have to say I’m a child of the 80’s. I love the decade of decadence.

What artists inspired you from the past and which current artists have caught your ear?

Steve:  I would have to say…Michael Sweet of Stryper, Tony Harnell of TNT, Sebastian Bach and James LaBrie.

Some of my favorite new artists are Five Finger Death Punch, Killswitch Engage, in This Moment and All That Remains.

People are often times surprised at what they find “hiding” in my music collection. Anything “out of the ordinary” in yours?

Steve:  Oh man…there are a ton of things on my IPod that makes me go huh…I didn’t know I had that. Stuff like Marvyn Gaye, Notorious BIG, and obscure 80’s one hit wonders 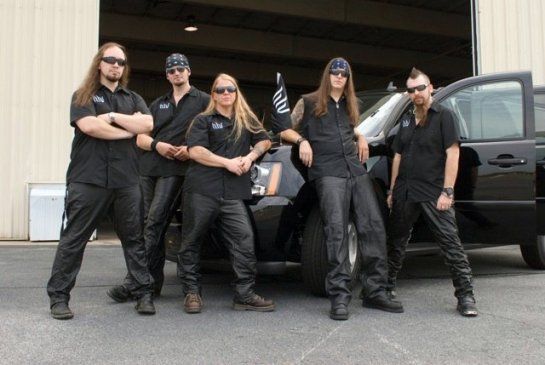 I have found myself really getting to enjoy the music of Halcyon Way. Tell us a little about Halcyon Way.

9.Halcyon Way has been around in different forms for the past 10 years. They’ve gone through a ton of turmoil over the years from member changes, recording issues, canceled tours and even cancer in the founding member guitarist Jon Bodan. I’ve been in the band just about 3 years. During this time we’ve done a few tours, released 2 CDs and are getting ready next month to record our next disc and shop around for a new label. Our music is available on halcyonway.com, most major retailers and iTunes.

Given the opportunity to address young musicians what advice would you give them?

Steve:  Work hard, work hard, work hard…don’t let your ego get in the way. Remember there is someone who is practicing in their bedroom that are better than you and I will ever be. Always remain humble because that will speak tons of your character.

Lastly, have a career/job that will help pay the bills. Don’t let it get in the way of you’re dreams but have something to bridge the gap where you can live and follow your dreams.

What do you have to say about the music industry/scene today?

Steve:  It’s awesome to be in the business but the money is not there like it use to be. Some of it is from bit torrent sites. I’ve seen on one site our last album was downloaded somewhere in the 20-30,000 times)and some of it is from the world economic crisis facing the world. We pay a lot of stuff our own pocket which is why you need to have a job. The day of getting a million dollar contract being dropped in your lap is sadly gone.

Thanks for taking sometime to talk to me. – Steve Braun

Thank you Steve for talking with us.

Check out this promo video: