WESFEST 8: Over $19,000 of $25,000 Goal Reached to Benefit the Wes Wehmiller Endowed Scholarship at Berklee College of Music 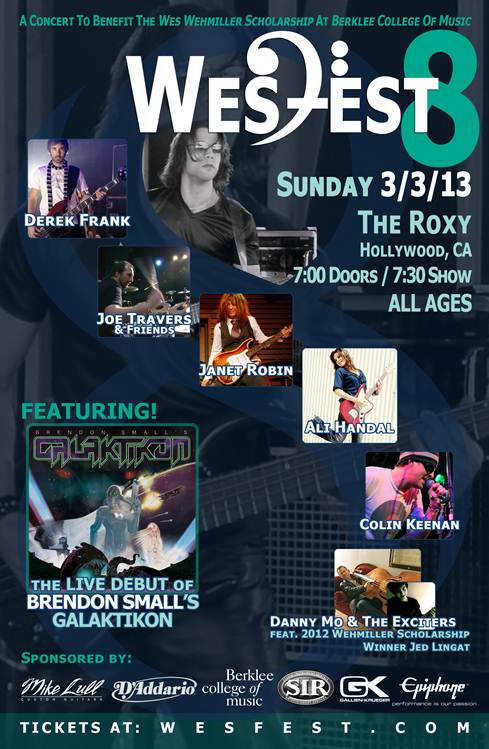 This year’s WESFEST 8 line-up features the live debut of headliner BRENDON SMALL’S GALAKTIKON! The attraction of such a huge, unique concert experience combined with this important scholarship benefit has drawn the attention of music fans far and wide – so much so that Berklee College of Music has almost reached its 2013 scholarship fund goal of $25,000! The fund is currently at $19,000 – only $6,000 away from the projected goal! For directions on how to donate to the fund and buy tickets to WESFEST 8, visitwww.weswehmiller.net/wesfest/wesfest-8/.

WESFEST 8: A Concert to Benefit the Wes Wehmiller Endowed Scholarship at Berklee College of Music will take place on March 3, 2013 at The Roxy in Hollywood, CA. The show marks the live debut of BRENDON SMALL’s GALAKITKON, the critically acclaimed side-project of Brendon Small – the creative mastermind behind the smash-hit animated [adult swim] TV show Metalocalypseand the band Dethklok.

WESFEST 8 advance tickets are available through March 1 for $35 per pair of tickets or $20 per single ticket. Tickets are $30 each at the door.

WESFEST 8 is a benefit concert whose net proceeds go to benefit the Wes Wehmiller Endowed Scholarship at Berklee College Of Music. The scholarship fund honors Wes Wehmiller (1971-2005), a Berklee graduate (’92) and highly accomplished bassist, athlete and photographer who died of thyroid cancer in January 2005. Established by his family and friends, the Wes Wehmiller Endowed Scholarship is awarded annually to a continuing student at Berklee who best exemplifies the excellence and grace Wehmiller showed as a bassist and as a human being. The WESFEST concert series and related fundraising drive has raised more than $150,000 over the past seven years. This year, the goal is to raise $25,000.

WESFEST 8 recently announced that sponsors Epiphone Guitars and Gallien-Krueger are giving away some awesome gear to two lucky attendees of the WESFEST 8 benefit concert. Fans can win an Epiphone “Thunderhorse” Explorer Guitar or a Gallien-Krueger MB 500 Lightweight Bass Amp. To win, all you have to do is buy tickets to WESFEST 8, show up, and you’ll automatically be eligible to win one of the two following items. For more information and contest details, visit www.weswehmiller.net/wesfest8geargiveaway/.

For any questions about ordering tickets or donating to the fundraising drive, please contact Peter Gordon at 818.380.3041 orpgordon@berklee.edu.