Taking Place on May 11, 2013 — Featuring Performances by ANVIL, RAVEN, THE RODS and Locals LORDS OF MERCY

Hosted by Eddie Trunk of That Metal Show 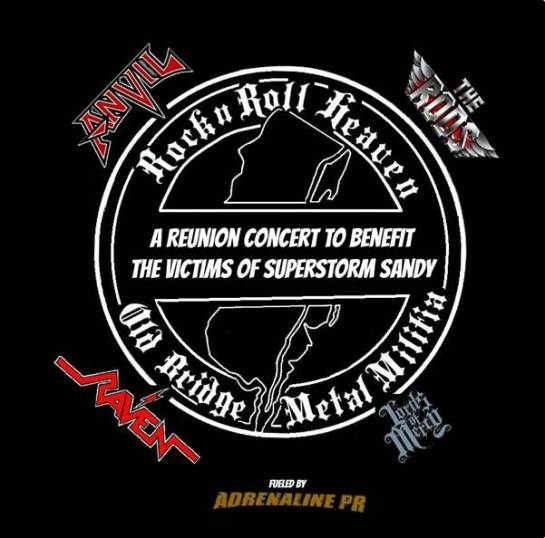 ROCK N’ ROLL HEAVEN and the OLD BRIDGE METAL MILITIA are uniting to bring you their highly-anticipated  Reunion Concert and Fundraiser to benefit the victims of Superstorm Sandy. The event will take place on May 11, 2013 at Encore Event Center in Freehold, NJ (106 Schank Rd).

New Jersey birthed heavy metal in the United States in the early 1980’s. The state of New Jersey was an integral part of launching the careers of these bands, as well as everyone from Bruce Springsteen to The Misfits to Bon Jovi and more. Now, ROCK N’ ROLL HEAVEN and the OLD BRIDGE METAL MILITIAare bringing these genre-founding metal bands together for this special event.

Eddie  Trunk (That Metal Show) will perform Master of Ceremonies duties with special guest hosts and an all-star jam to be announced. With a now confirmed line-up of Anvil, Raven, The Rods and Lords of Mercy this evening is poised for a metal pounders delight.

Doors will open at 7:00pm and there will be a drinking section for those 21+. Tickets will go on sale shortly so stay tuned for purchase links coming soon. R N’ R HEAVEN and OBMM ask all attendees to bring canned goods or non-perishable food items for a food drive which will benefit local area soup kitchens and shelters.

ROCK N’ ROLL HEAVEN/Megaforce Records/ Crazed Management founders Jon and Marsha Zazula are gearing up for the reunion. “It’s really great to bring the Militia together again and we look forward to seeing all of the  old faces and new faces, both young and old,” state the Zazula’s. “We’ve already heard that fans are coming in from Germany and even up from Florida. They don’t even know the line-up yet, that’s how cool this is! We can’t wait to bang with the best of them for this really good cause.”

John Gallagher of Raven adds, “We are proud to be part of this historic gathering of the clans of our old stomping grounds for such a worthy cause and are ready to kick major ass!!!”

“The Zazula’s and I made some great albums together,” adds Carl Canedy of The Rods. “Rock, Garry and I look forward to working with our good friends once again. No one throws a metal bash like the Z’s.”

Lips of Anvil states, “Doing this gig in NJ is exceptionally special to Anvil. We are expecting to see many of the original people we met back in ’82 when we played the Route 18 Flea Market. We have remained close friends through the metal ages… we look forward to our moments together again. See you all soon.”

“Lords of Mercy are proud to be a part of such a historical event,” states Pete Perrina of local metal band Lords of Mercy. “We are ready to promote this show and kick ass come show time. This show is guaranteed to be one of the HEAVEST shows of 2013!”

This is an event to benefit the victims of Superstorm Sandy, which wreaked havoc on the Jersey Shore and on the lives of its residents. Superstorm Sandy has left dozens dead and thousands homeless – making it the worst storm in the region’s history. This is a 100% non-profit event.

Invite your friends, family and neighbors! All are welcome – Keep your kids in tow and enjoy Encore and ‘iPlay America’ – check it out at this link.

GIVE THE GIFT OF METAL MUSIC!