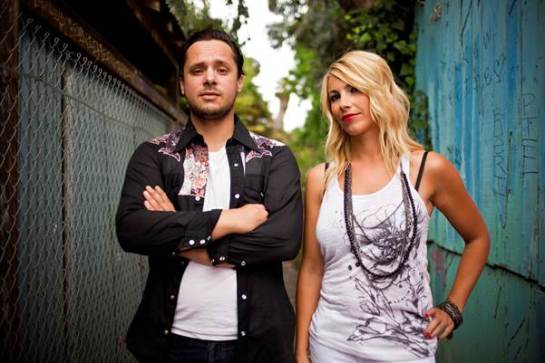 Today, Los Angeles, CA-based folk rock group YARD OF BLONDES released the new music video for their first single, ‘Murderology’, with Alternative Press Magazine. The track is cut from their upcoming EP of the same name. You can view the music video at Altpress.comnow via this link. The video stars YARD OF BLONDES vocalist and guitarist Vincent Walter Jacob and vocalist/pianist/organist Fanny Hill.

YARD OF BLONDES will release their upcoming EP, Murderology, via High Desert Lo-Fi Records and MTV award-winning and Grammy-nominated art agency HK Corp on March 26, 2013. YARD OF BLONDES recorded the EP with Julian David at Firewater Studios (Korn, Spliknot, Unkle) with the full support of its owner, Billy Graziadei of Biohazard.

YARD OF BLONDES boasts influences beyond folk music by incorporating stoner rock, pop-rock and indie bits in their music, as well. The band is already well known on the west coast, having performed at more than 100 shows with other great bands such as Hermane Düneand Alain Johannes (Queens of the Stone Age), and they have been growing as a full live band on the stages of L.A. clubs such as The Bootleg Theater, El Cid, The Viper Room, TAIX, Skinny’s Lounge, Hemingway, the Whisky A Go-Go and more.

YARD OF BLONDES is:

For more information on YARD OF BLONDES, please visit these websites: