From the opening notes of “I Remember Now” to the closing notes of “Eyes of a Stranger”, Operation Mindcrime was played in its entirety  to perfection at The Hard Rock Casino in Albuquerque, NM on 04/12/13. No breaks, and no interruptions, the story of Operation Mindcrime was told to completion. Never mind about controversy and nay saying, THIS was Queensryche at its finest. Like a superhero calling forth his team mates, Geoff Tate has assembled a rock solid lineup. 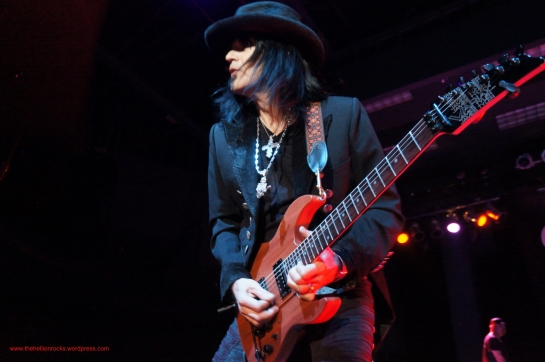 Somewhere behind this kit is Simon Wright

Rudy Sarzo showing us how bass is done!

After totally annihilating us with their blistering rendition of Operation Mindcrime, Geoff finally broke his silence and talked to the wildly enthusiastic crowd.  “You want more?” he queried. Queensryche then launched into a four song encore set. “Silent Lucidity”, “I’m American”, “Jet city Woman”, and closing with “Empire”. Geoff and crew continued to whip the crowd into submission until the very end. It was awesome to see the massive crowd singing in unison to these great songs. 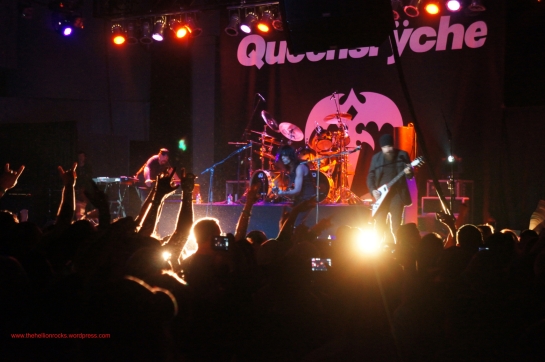 the crowd says it all!

Thanks Geoff, Robert, Rudy, Kelly, Simon, and Rudy S. for giving us a memorable evening and keeping the music of Queensryche true to form!

at the meet and greet

I would like to give a special shout out to Jeff Albright from THE ALBRIGHT ENTERTAINMENT GROUP  for making it possible for me to cover this show.