SWEDEN – Katatonia, Sweden’s master of dark rock, will kick off its North American tour with Opeth, “North American Heritage Tour,” tonight in Buffalo, N.Y. The extensive run will conquer over 30 cities in the U.S. and Canada this spring, including two special stops, the first in Worcester, Mass. on April 20 where the band returns to play the New England Metal & Hardcore Festival, then in Clifton Park, N.Y. on April 28 where acclaimed Porcupine Tree front-man Steven Wilson will join for the night. A full list of confirmed dates, including five Katatonia headlining performances, can be seen below.

Said guitarist Anders Nyström, “Dear Katatoniaks of North America! You have been blessed to get another round of this truly classic bill together, because today Opeth and Katatonia, two bands who share a longtime friendship and many musical collaborations, are back on the road to cloak you with some true Swedish atmosphere across North America for the next six weeks. We’ve have also added five headlining sideshows that will see Katatonia play a full set. Check out our Facebook (www.facebook.com/katatonia) for daily updates on stage times (as a general rule we’re always on early after doors) and there you’ll also find the ticket links. More and more shows are already added to the sold out list, so we look forward to many fine evenings to come. Let the sunset choir sing again and see ya soon!” 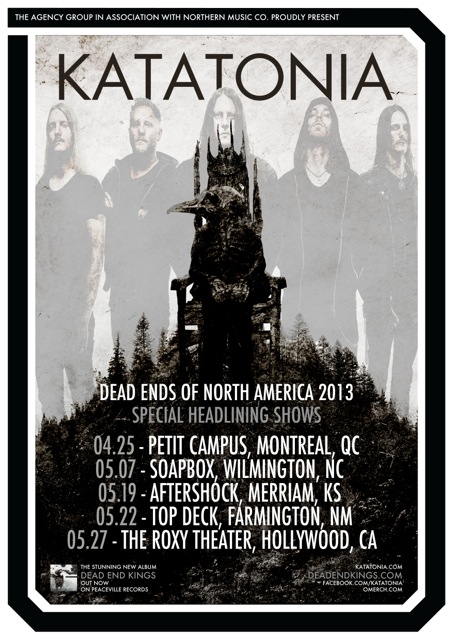 Katatonia is touring in support of its ninth studio album, Dead End Kings, which released August 28, 2012 on Peaceville Records.

Katatonia’s most successful U.S. debut in its 20-year career, Dead End Kings entered at #4 on the Billboard Heatseekers chart, #138 on the Billboard Top 200 and #10 on Hard Rock, while also topping 2009’s Night is the New Day first week sales in the U.S.

Additionally, to coincide with this year’s Record Store Day set for Saturday, April 20, Katatonia will release a special limited 7″ featuring the track ‘Buildings,’ lifted from last year’s universally lauded album. The title is presented on transparent 7″ vinyl and features a re-mix of “Hypnone (Frank Default Hypnocadence Mix),” a track previously unavailable in the U.S.