I have had this CD for a couple of weeks now. The official release is going to be on January 17th 2013 at the Launchpad in Albuquerque, NM.

Let’s get into the CD itself. The Ground Beneath is one of those bands that just plain and simply gets it. Steve Beneath is one hard-working SOB, always at shows, doing radio guest spots, texting about upcoming shows, anything it takes.  That tenacity shows in the latest release from The Ground Beneath “Self Titled”. “Self Titled” is actually the name of the new CD, a little bit of humor from the band.

Let’s get the technical stuff out-of-the-way first. The CD is clean and I mean CLEAN, the production quality is top-notch. The mix is great and the sound is not muddied in any way. Kudos for the guys on their attention to detail. This CD is meant to be played LOUD and is sounds great at those ear bleeding volumes.

Now for the fun stuff! I have been listening to this CD pretty regularly and this just so happens to be my third rewrite of this review. I keep coming back to this CD and discovering more stuff that I like about it. I love it when a band makes music that is inspired by other artists and yet sounds new. Let me explain, I know Steve is inspired by bands like Zakk Wylde’s Black Label Society, Pantera, Down, Corrosion of Conformity, HELLYEAH, Strapping Young Lad, Deftones, U2, Pink Floyd, Led Zeppelin, Damageplan. You can hear elements from all of these bands in the music and yet it remains distinctly The Ground Beneath.

“Self Titled” is , dare I say, a groovy record. While the world must be obliged with the obligatory single, which is “Blind”, I think the CD needs to be taken as a whole. The flow of the songs is just that good. I actually forget this is a local band out of Albuquerque, New Mexico when I am listening to it. Which leads me to ask “Why isn’t stuff like this being played on national radio?”

Steve handles all of the writing of the lyrics and music which is a testament to his talent. The band as a whole plays the songs that Steve has envisioned with a fervor and passion that will quickly infect you. Steve’s vocal work and guitar skills are right on par with some of the music world best. Brian “Bearface” Scott goes from flat-out pound your skull in drumming to tribal like beats keeping the band anchored with a solid back beat. Hunter McCoy anchors the package together with some bass lines that will have your heart pounding trying to keep up. 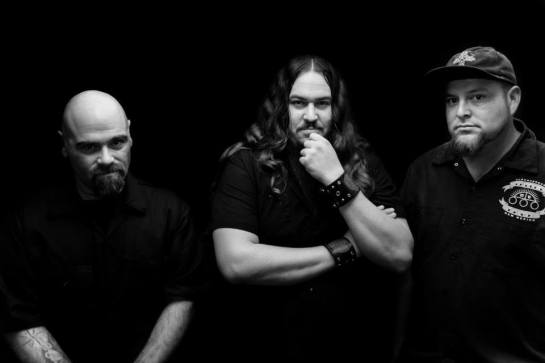 In conclusion “Self Titled” is a record chock full of solid Rock N’ Roll tunes, pinch harmonics, throbbing bass lines, pounding drums, melodic compositions, hypnotic vocals and yes even a cello. Solid 10 out of 10 in my book, definitely a necessity in everyone’s music collection.