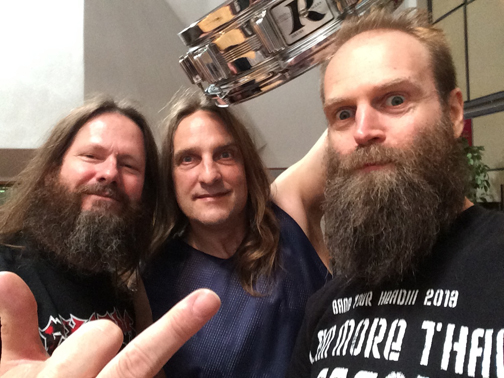 “We are well into drum tracks; everything is going super smooth and Tom [Hunting] is just killing it! Best drum sound this band has ever laid down – sounds just simply pummeling! Only one more song and some B sides to go, then we go through things and make sure everything is up to par, and then time for guitars! Can’t wait to add the crunch to these monsters. This is gonna be so goddamned heavy it ain’t even funny! We couldn’t be more stoked and pleased with how this record is coming along! Bludgeoning!”

EXODUS performed at Kirk Von Hammett’s Fear FestEviL in San Francisco in early February. This May, they’ll play six shows as direct support to Slayer with openers SUICIDAL TENDENCIES before joining Guns N’ Roses, Avenged Sevenfold, and Kid Rock at this year’s Rock On The Range festival. On August 10th, EXODUS will perform at Heavy Montreal at Parc Jean-Deapeau in Montreal, QC with Slayer, Lamb of God, Hatebreed and more.

With a career spanning 34 years and over five million albums sold worldwide, EXODUS have not only helped shape & define the thrash metal genre for over three decades but they continually seek to raise its standards. One of the forefathers of the Bay Area scene that became known & envied throughout the world, the band’s 1985 debut album, Bonded By Blood, has since become a legacy album featuring mandatory live staples such as “Strike Of The Beast,” “A Lesson In Violence,” and the album’s title track. Formed in 1980, the band’s original members included Tom Hunting on drums, Kirk Hammett (METALLICA) & Tim Agnello on guitars, and Carlton Melson on bass. With a line-up that evolved throughout the years, the current incarnation of EXODUS has remained unchanged since 2007: Gary Holt & Lee Altus on guitars, Tom Hunting on drums, Jack Gibson on bass, and Rob Dukes on vocals. To date,EXODUS has released ten studio albums, two live albums, and one compilation. Their most recent release, Exhibit B: The Human Condition, debuted at #114 on the Billboard Top 200 Albums chart in 2010.