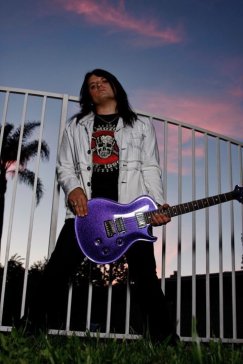 We’re talking with Alex Grossi, guitarist for the band Hotel Diablo. I know Alex has a great career and has played with some stellar people, but we are going to focus on his new project Hotel Diablo.
Hotel Diablo is: Rick Stitch (Vocals), Alex Grossi (Guitar), Mike Duda (Bass), Mike Dupke (Drums). They have a new CD out which is calledTHE RETURN TO PSYCHO CALIFORNIA.
What are the origins of Hotel Diablo? Was it just one of those magical things that just happened, or was there an inkling running around in the back of someone’s head?
(ALEX) Hotel Diablo really came together right after Rick and myself finished a 2 year run with Adler’s Appetite (w/ former GN’R  drummer Steven Adler). During the tour we had started writing together and felt that the material was good enough to stand on its own. We ended getting in a room with Mike and Mike and it clicked instantly.
Was the lineup set from the get go or did it get a little tweaking?
(ALEX) No, it was the 4 of u right off the bat and still is, we are lucky to have found such good chemistry right out of the gate.

Where did the name Hotel Diablo come from? In my mind it puts a visual of driving down a deserted desert highway, tired as hell, and seeing a  motel with a sign “Hotel Diablo”. Were any other names thrown around?
(ALEX) The name came from Mike Duda, it could mean a lot of different things – and actually does…Anyone who has spent enough time in the seedier parts of Hollywood will definitely be able to relate…
The song writing process differs from band to band, sometimes  with members bringing in bits and pieces individually to bands just jamming and building upon that, what is the formula for Hotel Diablo?
(ALEX) Every song came together differently, and we all have our input. It usually starts with a riff or an idea on acoustic guitar and builds from there. Once we all get in a room and bang it out, it really takes on a life of its own, especially with the brutal rhythm section that these guys are..
I know of a lot of projects where guys from different bands get together and jam but nothing ever comes out of it. What was it about Hotel Diablo that stuck?
(ALEX) I think because we are genuinely trying to do something creative that is real and people can see and feel that. There are so many”members of” projects that are either cheesy cover bands or cash grabs…This is neither, and I am proud of that.
So, the lineup is locked, songs are written, it’s time to hit the studio, tell us about that process.
(ALEX) We had a handful of songs demo-d, but the final piece of the puzzle really came when Gilby Clarke (GUNS N’ ROSES) stepped in as producer, he was instrumental in getting it all together and had some great ideas that really brought the songs to the next level.
The new record is called THE RETURN TO PSYCHO CALIFORNIA what’s behind that title? 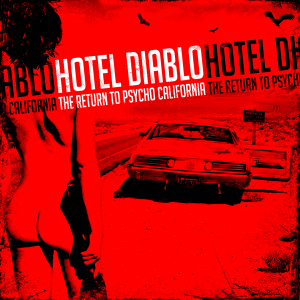 (ALEX) I think our singer Rick Stitch put it best —  “The Return to Psycho, California” is “a collection of stories, true stories, experienced during a time when our lives were filled with mind-altering shots of wretched adrenaline,” says Stitch. “Strings got bent, knobs were turned and an uncontrolled visceral energy screamed life” into what has become “Psycho, California”.
I saw that Gilby Clarke and Matt Starr were used in the production side of the recording, what was it like working with them?
(ALEX) They both did a fantastic job capturing the spirit of these songs in the studio…Gilby really was the main producer on the record, we brought Matt in to do “Bury You” and “Wicked Lines”. We are all pretty good friends so it was very cool, relaxed vibe the whole time. I am very happy with the team we have.
I really enjoy the straight up sound of the band, describe to the readers in your own words what they can expect from the record.
(ALEX) It is really nothing more than 4 guys playing straight-up rock, this record is really just something we felt was missing from the rock scene. So many guys out here in Hollywood spend their time trying to chase the latest fad, and it pretty much NEVER works. I am proud that this band is simply doing what we like, regardless of what is popular. Old school, straight up rock seems to never go out of style…
I’m an old school nut who likes having the CD in hand, looking at the artwork, reading liner notes, so on and so on. I’m really glad to see that a physical copy of the CD will be out on Sept. 25th.  Congrats on that, what distribution channels and where can it be found?
(ALEX)Thanks, we are very happy that the label interest came as quickly as it did, and are VERY happy with the deal we ended up with.It is really hard these days for new bands and we are very thankful to be given this shot.
The record is being released worldwide via Scarlet Records on September 25th, Entertainment One (Bush, Chickenfoot, Black Label Society) is our North American distributor.
It is also coming out in the UK, Spain, Italy, Greece, Austria, Australia, Russia and many other territories. A complete list of distributors can be found on our site. www.thehoteldiablo.com
I have had the MP3 album since it was released and it receives regular play in my rotation. “Taken”, “Psycho, California”, and “Trigger” are standout tracks to me. Do you have any favorites?
(ALEX) “What You Do To Me” is one I am very proud of, I think we really hit our stride on that one.
I think it was a bold move covering “Wonderwall” any stories to tell about choosing this song for inclusion on the record?
(ALEX) We actually were just messing around with it one day, and then while driving home from the studio the original came on the radio, and I had forgotten what a great rock band Oasis is. We thought it would be cool to do. I think Rick did a fantastic job on that one.
It’s all you man, tell us anything and everything you want about Hotel Diablo:
(ALEX) There is a ton of VERY cool stuff on the horizon for us, please keep in touch. We control all of our social media and are very hands-on with the whole thing…check us out at:
www.thehoteldiablo.com
http://www.facebook.com/#!/hoteldiablo
Here’s a link to their song “What You Do To Me”
There you have it, an insight into a great new band: Hotel Diablo. Check out their website www.thehoteldiablo.com, like them on Facebook at http://www.facebook.com/hoteldiablo?ref=ts pick up the new record The Return To Psycho California ASAP you will not be disappointed.
the Hellion