CHECK BACK RIGHT HERE TOMORROW FOR SOMETHING EXCITING!!!!

ONE MACHINE just finished the recording process on their debut album, which is currently in the mixing stages. The band has already been offered European festival dates and expects to make their live debut this summer. Fans can check out a clip of the track ‘One Machine’ right now on Steve Smyth’s YouTube page. Click this link to listen!

Smyth had often given thought to leading his own band throughout his distinguished career as a member of bands including Testament,Nevermore, and Forbidden, amongst others. Smyth had written a number of songs, but the challenge of finding the right members to bring them to life remained.

He found a more than capable shredding second guitarist in Jamie Hunt, and the two began collaborating on the material Smyth had. “Jamie’s playing complements mine extremely well, and we hit it off perfectly when we got together to work on the songs,” says Smyth.

A vocalist was found in the form of original Mercenary singer Mikkel Sandager. He was exactly kind of singer Smyth was looking for, with his versatile ability to sing in different ways, and his readiness to  be pushed into new musical territories. “When our former bands toured together, I got to witness night after night, exactly what Mikkel could do; deliver a solid performance with an incredible range, as well as multiple characters in his voice. He’s perfect for this band,” adds Smyth.

Smyth, Hunt, and Sandager then set about refining and shaping Smyth’s original material.

Drummer Raphael Saini, formerly of Italian progressive metallers Chaoswave, whose band Smyth had previously provided guest solos for, was next to join. During the recording process, Saini lived up to Modern Drummer’s assessment of him as “a drum assassin; cold blooded, precise, and brutal”. To quote Smyth, “Raph surprised me with his ability in delivering these tracks. He totally killed it!”

In 2012, bassist Tomas “O’Beast” Koefoed, formerly of Mnemic, came on board, adding his distinctive sound to the tracks. Smyth states, “Tomas is without a doubt one of the most solid bassists I’ve encountered in some time! He literally added an entirely new dimension to these songs that would not have been possible to be achieved without him.”

Keep an eye out for ONE MACHINE performing on European festival dates this summer and stay tuned for more information coming soon!

To learn more about ONE MACHINE, please visit www.feedtheonemachine.com. 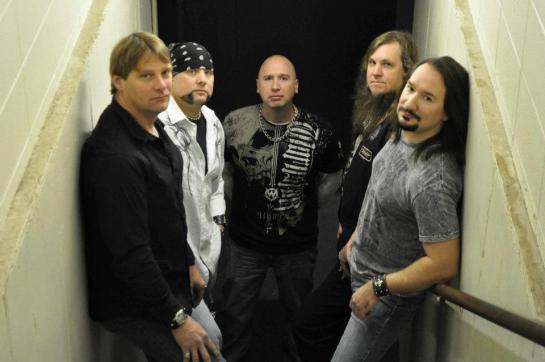 2013 promises to be a stellar year for new music. One of the releases I am super stoked about is Mind Merchant. They just released a new track to whet our appetites. So give “Crash and Burn” a listen right here:

After facing a trying year, modern metal’s greatest band, LAMB OF GOD, is being honored by one of our generation’s greatest music publications. Arriving just a few short weeks after the band’s fourth Grammy nomination, February 1st will mark the release of Modern Drummer Magazine’s March 2013 issue—featuring none other than LAMB OF GOD drummer CHRIS ADLER on the front cover. This is Chris’ second cover appearance with Modern Drummer Magazine.

In the exclusive Modern Drummer Magazine interview, CHRIS ADLER takes readers through his recent experiences and explains how mental toughness has kept him positive in his professional and personal life. Check your local magazine stand or bookstore for a copy starting February 1st!

CHRIS ADLER is heading out to Prague within the coming days to support his band mate and brother in music, Randy Blythe, during his trial. When he returns, Chris will announce his involvement in an upcoming drumming project. He will also put the finishing touches on his third book, “The Making of Ashes of the Wake”, coming soon.

In other news, CHRIS ADLER recently announced his exclusive North American endorsement and distribution deal with VRUK Corporation, specifically in conjunction with the CHRIS ADLER Signature VRUK DrumMaster Heel Plate—a vital tool for drummers looking to increase endurance and speed that CHRIS ADLER himself is distributing exclusively throughout North America. Head to this location to view a video about how the VRUK DrumMaster Heel Plate works (click “watch video” link), read testimonials, grab coupon codes and more! To purchase or reserve your heel plate, visit www.chris-adler.com/onlineshop/ or www.vrukpedal.com/store.html.

As we will be covering NAMM for the next few days posting will be a little slow. But stay tuned for cool stuff!

A LIFE ONCE LOST is pleased to announce The Man Machine Tour 2013 with San Diego doom metal band Author & Punisher and extreme Chicago newcomers Encrust. The band will start out solo for a few dates in early March and will join up with Author & Punisher after a few appearances at SXSW. Encrust will join the tour for three dates in Kentucky, Illinois and Ohio. See below for a full listing of upcoming tour dates.

A LIFE ONCE LOST Only:

The band’s new album, Ecstatic Trance, is available internationally via Season of Mist. You can purchase the album and other merchandise at Season of Mist E-Shop. While you are browsing the web, make sure to visit the official A LIFE ONCE LOST website at www.alifeoncelostofficial.com.

To learn more about A LIFE ONCE LOST, visit:

Australian industrial metal heavyweights SYNTHETIC BREED are pleased to announce that they have released a brand new single featuring the return of original vocalist Callan Hughes. The new track, ‘Xenogenesis’, is a “taste of what’s to come” from the emerging band, bringing a polished and more refined sound to the table while retaining the same formulated chaos the band is known for. ‘Xenogenesis’ was mastered by Mike Spreitzer of DevilDriver.

Callan Hughes returned to the band in October 2012 and the band immediately started writing new material. ‘Xenogenesis’ is the first track that was recorded by the reunited group, and as stated above, really gives the listener a taste of what is to come from the band’s upcoming full-length album. The full-length, which currently does not have a release date, is presently in the works.

‘Xenogenesis’ is available for streaming exclusively on SYNTHETIC BREED’s Facebook page and the Rogue Records Facebook pageand is available worldwide on Rogue Records America’s bandcamp page. The single will be available on iTunes starting on January 25th.SYNTHETIC BREED is planning to release a lyric video this week just in time for the NAMM Show in Anaheim, CA. The band’s mobile app will also be updated for the event.

(January 16, 2013, Sun Valley/Hollywood, CA) –2013 is proving to already be a monumental year for Schecter Guitar Research as the company settles into its expanded headquarters in Sun Valley, CA,  ramps up for MAJOR new gear announcements and continues to amass a stellar lineup of artists, which includes some of the biggest names in the recording and touring industries. To that note, the company is proud to announce the partnership with a true modern-day rock icon by signing Mötley Crüe / Sixx: A.M.bassist, NY Times bestselling author and radio host Nikki Sixx, adding even more fire power to its roster.  Not only has Schecterlanded a talented and noted songwriter and player, but also one of the leading voices and minds in fashion, non-fiction, photography and media via his clothing lines, New York Times top 10 selling books and his successful internationally syndicated radio shows Sixx Sense with Nikki Sixx and The Side Show Countdown with Nikki Sixx.

However, it is his musical pedigree, history and current musical projects that helped the collaboration with Schecter come to fruition. “It was an exciting and creative process to work with Schecter on the new Schecter Sixx Signature Series Bass,” states Sixx, “It was important to all of us to design a bass that would feel right as well as sound amazing in the hands of all players, not just me. Every detail about the new Schecter Sixx comes from all of our collective experiences – whether it’s my 30 years of playing live and recording or Schecter’s unprecedented standards for making quality instruments for players of all genres. Simply said, this bass rocks!”  Schecter’s Executive Vice President, Marc LaCorte adds, “I really felt as if we instantly gelled and were looking to accomplish the same goal with this project.  Above all, it was so refreshing to see an artist of Nikki’s stature be so involved and genuinely concerned about every detail in the creation of this instrument.”

Nikki Sixx has been known for years as a player stylized by his brashness and Schecter has taken it upon themselves to create this Nikki Sixx signature mode, aptly named the Schecter Sixx. Nikki Sixx will be introducing the Schecter Sixx with an exclusive signing at the winter NAMM Conference in Anaheim, CA on January 26th from 3:00pm-4:00pm PST at the Schecter booth (Room 210-D). It can be maintained that The Schecter Sixx will reflect Nikki’s style, both visually and sonically, while being able to withstand the punishing rigors of the road from opening night to the end of tour closing set.  The Schecter Sixx bass will surely make a rumble through the industry and then resonate with players, retailers and consumers alike.

Nikki Sixx is the International rock icon, founding member of Mötley Crüe and Sixx:A.M., two-time New York Times bestselling author with The Heroin Diaries and This Is Gonna Hurt, co-founder of rock couture fashion line Royal Underground, philanthropist, photographer and internationally syndicated radio show host of Sixx Sense and The Side Show Countdown. Some of Sixx’s accomplishments include over 80-million in album sales with Mötley Crüe and Sixx:A.M., countless sold out tours, Mötley Crüe’s sold out residency at the Hard Rock Hotel & Casino in Las Vegas – a first for the hard rock genre – an award-winning Superbowl commercial for Kia, photographing a high fashion shoot for The New York Post’s prestigious supplement Alexa, and raising several hundred thousand dollars through his Running Wild in the Night charity for Covenant House California.

As Schecter Guitar Research moves into its 37th year in business, they have solidified the elite status, as one of the world’s premier guitar companies.  Its continually evolving and expanding line of guitars and basses appeals to a broad spectrum of players and diverse musical styles. Its core business practice offers high-quality instruments with professional components at an affordable price.  One of the company’s strongest assets is its growing roster of high-profile artists, including: Nikki Sixx, Disturbed, Avenged Sevenfold, The Cure, Papa Roach, Seether, Prince, Stone Temple Pilots, Nevermore and Black Label Society.  For more information log onto: www.schecterguitars.com