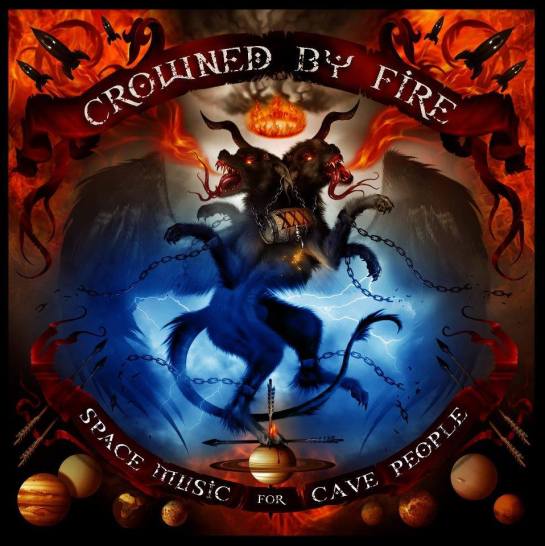 4. Something In Her Blood

Crowned By Fire is no mediocre band. They have completely proven that with the release of Space Music For Cave People. The new EP drops July 1st on Chrome Mountain Records. There have been some quality releases as of late but this one is a game changer.

Like a defibrillator this record send a high voltage charge straight into the heart of Rock N’ Roll.  Crowned By Fire comes on strong with the swagger of gunfighters walking down a street at high noon looking for trouble. Intense riffs powered by the guitar assault of the highly underrated Justin Manning,  the chest crushing bass of Chris Breedlove, the powerful punch on the drums of Rocco F Paolone, combined with the lyrics and the “I just kicked you in the nuts” vocals of John Fitterer fuel the Crowned By Fire machine.

Like those famous potato chips in that bright yellow bag, once you start listening, you just can’t stop. On more than one occasion I have found myself waking up with one of the six tracks playing in my head.

While track for track the entire record is amazing there are some stand out tracks here. “Something In Her Blood” was one of the last tracks put together for the record but it is the first to stand out to me. Justin channels some guitar greats here and yet puts enough of his own spin on it to make it his own style. The title track “Space Music For Cave People” reminds me a little of the Cult on steroids. John completely owns with his vocals on this one. “Crowned By Fire” opens with some dirty from the swamp bass from Chris. Those three tracks are the ones that reach me the most.

The records on a whole is deep on so many levels. Each listen provides you with something new in its structure. In these days of “fast food music”,  Space Music For Cave People is a sit down full course dinner. This is a record made the right way and with the love of making music behind it.

Here’s the lyric video for the title track “Space Music For Cave People”:

Stay up to date with CBF online:

This is our interview with Dewey Bragg, and Mark Zavon from Kill Devil Hill.  Thanks a Million Guys.

What an honor it was to sit down and talk with Kill Devil Hill at Rocklahoma in May.  I have never been able to catch these guys before now, and  I am hooked!  Straight up metal to the face along with melodic hooks to keep you singing their songs under your breath for hours after.

Kill Devil Hill Headlined the Hard Rock Stage  Saturday night and was by far the best band I was able to catch all weekend.  I rarely left the media tent but after being treated so well during the interview there was no way I was missing their set.

We had mentioned to them what a party Rocklahoma can really be. We recently heard from friends who run Camp Jager, an after party stage area in the campgrounds…

I am old enough to remember the tales of old told in the dark long ago. You know the urban legends I speak of. Bloody Mary, The vanishing hitchhiker, the killer in the backseat, the babysitter and the man in the house, humans can lick too, aren’t you glad you didn’t turn on the light, and the hook. We loved to scare each other and adapt the stories to our areas and situations. We all knew they were just stories but there was always that little bit of apprehension.

Now we have the internet taking the stories worldwide. There’s a new crop opened up to us and just recently it turned scary. The tales of  the Slender Man have hit the news in a big way. It is interesting to note that what started out as an internet meme has grown into the sensation it has become. It is as if the internet has actually given life to this creature. Now we have two young girls  who have attempted to impress this made up legend by harming a friend. What are we becoming? Thoughts everyone?

Here is a recent article on a BMI lawsuit I found interesting: