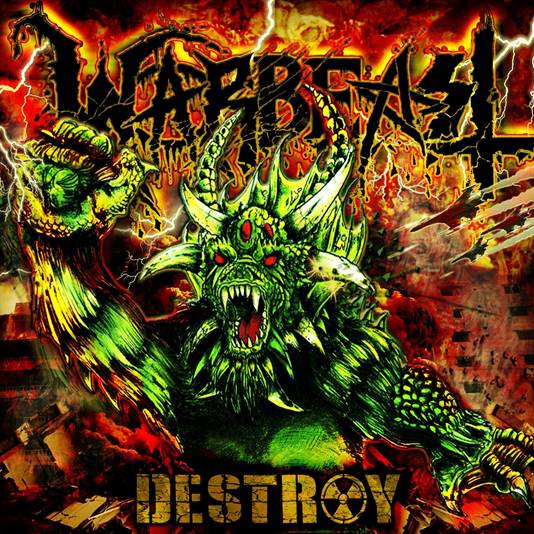 WARBEAST is pleased to announce that Casey Orr (Rigor Mortis, GWAR) will join them as their fill-in bassist while on the road this spring with GWAR! The band’s upcoming tour dates with GWAR and Wilson kick off in Tucson, AZ on April 10th. The 16 day run, dubbed the “Fate or Chaos Tour”, will continue through the month of April until it closes in Jacksonville, FL on April 25th.

WARBEAST vocalist Bruce Corbitt states, “Obviously we are all psyched to have Casey on board for this upcoming tour with GWAR and Wilson. I’ve always respected Casey’s professionalism, abilities and musicianship from our many years together in Rigor Mortis,” “This will be a natural and comfortable fit for WARBEAST.  Plus he’s still buds with all of the guys in GWAR, so this tour will be a blast… to say the least.

“I am very excited to accept the challenge of playing bass for the mighty WARBEAST! I’m looking forward to crushing skulls with my brothers in the Beast, and I’m totally stoked to be bringing the thunder on the road this April, supporting my Scumdog family – GWAR,” adds Casey Orr. “Texas Thrash will Destroy!”

“This by far will be the most solid lineup to date with Casey Orr joining us for this tour.  I’ve known him all of my life and it just seems right,” adds WARBEASTguitarist Scott Shelby. “Casey is hyped as well, as is the whole band to move on to this new era and continue to Destroy!”

“I’m looking forward to the rhythm section being tighter than ever,” states WARBEAST drummer Joey Gonzalez. “I know Casey will be killer to learn from and jam with.  “

In addition to the newly announced tour dates with GWAR, a CD release show for Destroy will take place at The Rail Club in Fort Worth, TX on April 6, 2013. See directly below for all confirmed tour dates.

WARBEAST “Fate Or Chaos Tour” With GWAR and Wilson:

WARBEAST recently revealed the upcoming release date for their new full length album, Destroy. The new album, produced by Philip H. Anselmo and engineered by Stephen “The Big Fella” Berrigan, will hit stores and digital retailers on April 2, 2013 via Housecore Records. Destroy was recorded at Nodferatu’s Lair in May and July 2012 and mixed by Anselmo and Berrigan. The album artwork and concept were designed by “Carcass” John Fossum with graphic and technical adviser John Deleon.

War of the Gargantuas, the new split EP by WARBEAST and Philip H. Anselmo, is out now! You can buy the split now at www.thehousecorestore.com.

For more information on WARBEAST, please visit these websites:

To donate to the Mike Scaccia Family Fundraiser, head here and follow the link: http://www.warbeast.org/?p=156