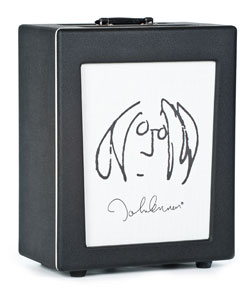 Sacramento, CA February 28, 2013 – Fargen Amplification has introduced the second guitar amplifier in its line that honors and pays tribute to John Lennon.   The JL-15 combines John Lennon’s signature tone from the 60’s and 70’s with his world-renowned self-portrait … in a unique offering for guitarists and Lennon fans.
The JL-15 is the production version modeled after the limited edition Artist Series announced last December.  The JL-15 is built with the same circuit, featuring a two-way Decade Switch that switches between distinctive John Lennon tones across the 60’s and 70’s – providing the guitarist with two amps in one.  The amp also features a proprietary WGS ceramic speaker and a special acoustically transparent and UV-protected grill cloth that serves as the canvas for John Lennon’s iconic self-portrait.

“I’ve taken the design and features from the original limited edition Lennon Artist Series and built them into the JL-15, which is more accessible by players at-large, priced as the market would expect in a boutique combo,” says Ben Fargen, founder. “ The tones produced by this amp are extremely accurate and based on years of knowledge and experience, not available like this elsewhere in the market.”
Fargen has licensed the rights to produce this line, from Bag One Enterprises and Live Nation Merchandise, and is distributing this on its website, and through it’s network of authorized dealers including music instrument stores and art galleries.  Details are available on the website and dealer inquiries are welcome.
The JL-15 is now available through Fargen’s authorized dealers, priced at $2,700 MSRP.
For more information, please visit www.fargenamps.com 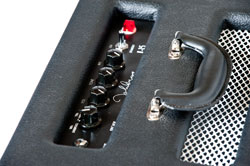 About Fargen Amplification/Sonic Edge
Ben Fargen founded Fargen Amplification in 1998 as a boutique amp manufacturer, and introduced the Sonic Edge brand in 2010. Ben has developed a reputation as one of the top engineers and visionaries in the amplifier space and has shipped custom-built and production model amplifiers to discerning players.
www.fargenamps.com