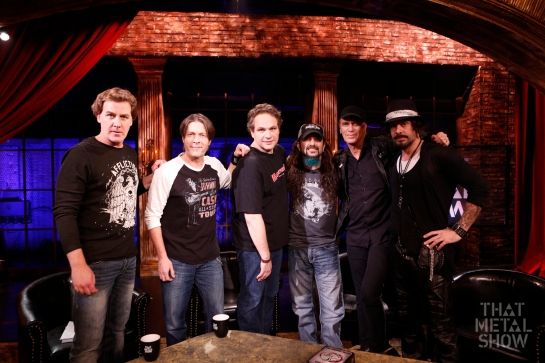 (March 27th, 2014 – New York, NY) – VH1 Classic’s centerpiece in original programming “That Metal Show” returns this week with Richie Kotzen, Billy Sheehan, and Mike Portnoy of The Winery Dogs. The band drops by to update hosts Eddie Trunk, Don Jamieson, and Jim Florentine on how things have been going since the release of their debut album, released last July. The band also unveils a new deluxe edition of their debut that will be released in the near future. Unfortunately, the band leaves mid-show because they were performing that night in New York City. TMS Alum, Vinnie Paul, returns for a third time to the show and finishes the show alone. Vinnie fills the hosts in on the latest Hell Yeah record, recounts tales from the road, and once again definitively states that the rumors of the possible Pantera reunion with Zakk Wylde on guitar are completely false. Vinnie eloquently states: “They call it a ‘reunion’ for a reason, it means that all original members will be returning.  Well, with Dime no longer being here, that’s not possible.  We had fourteen amazing years together, and in my humble opinion there’s no way to do that. I don’t want to tarnish the legacy of Pantera, and my brother.  This just needs to be left alone, as it is, and it’s time for us to move on, man.” Vinnie Paul also enlightens the hosts in the “Put It On The Table” segment as he answers the lightning fast Q&A portion of the show. Episode eleven of “That Metal Show” airs this Saturday, March 29th at 11:00PM ET/PT.

Guitar legend Yngwie Malmsteen returns to TMS but this time as the guest musician. Yngwie wowed the hosts, guests, and crowd with his amazing fretwork and improvisational abilities. He even takes a full guitar solo in the final segment of the show that is not-to-be-missed.

Episode eleven also features a “Metal Modem” segment with Michael Poulson, of Volbeat, checking in from his home in Denmark. Michael fills in the hosts about what is going on with Volbeat’s upcoming tour, what it was like to tour with Metallica, and how great it was to be on the road with Hell Yeah and Vinnie Paul, hoping they can do it again soon. The “TMS Top 5” tackles the Top 5 Greatest Hard Rock Trios with all three hosts only agreeing on one band, Rush. This week’s “Stump The Trunk” finds Eddie regaining his dominance over the audience’s questions. When he gets one wrong it allows a lucky fan to win one of Billy Sheehan’s basses; autographed by the Winery Dogs, which of course brings out everyone’s favorite Miss Box Of Junk, Jennifer.

Since the January 18th premiere of Season 13, “That Metal Show” continues to bring their audience the biggest names in hard rock and heavy metal. The season 13 finale airs on April 5th at 11:00PM ET/PT with guitar virtuoso Joe Satriani, comedians Artie Lange and Jim Breuer, and Yngwie Malmsteen as guest guitarist, earning the distinction as being the only repeat performer in season 13.

This season marks some monumental changes for the show as it returns to New York City for Season 13. Previously the show was taped over several days, in a course of a week, at Sony Studios in Los Angeles. The new season is now shot at Metropolis Studios on Tuesday nights, for broadcast that Saturday. Season 13 also consists of 12 new episodes making it the longest season in the series history. Fans can also catch the complete season 12 and brand new exclusive bonus clips at ThatMetalShow.VH1.com and on the new VH1 app. New episodes of season 13 launch on the web and in the app every Sunday morning following the show’s on-air premiere.

“That Metal Show” premiered on VH1 Classic in November 2008 and since has become the only place for all things hard rock and heavy metal on cable television. The show has been visited by some of the biggest names in the genres including members of Black Sabbath, Aerosmith, Pantera, Anthrax, Kiss, Iron Maiden, Metallica, Pearl Jam, Queensrÿche, and Heart.

“That Metal Show” is a production of VH1 Classic. Lee Rolontz, Jeff Baumgardner, and Keshia Williams serve as executive producers for VH1.

VH1 Classic brings you the best metal, rock, soul and pop from the ’70s, ’80s and ’90s. The channel features the gods of rock – from Black Sabbath, Metallica, and Iron Maiden to Stone Temple Pilots, Pearl Jam, and Dire Straits – in marquee concerts and music specials, and of course, tons of classic music videos. Recent big events include “National Metal Day” (11.11) and “Metal Evolution”, an 11-part documentary series on the history of metal.  When it comes down to it – all music should go to 11.