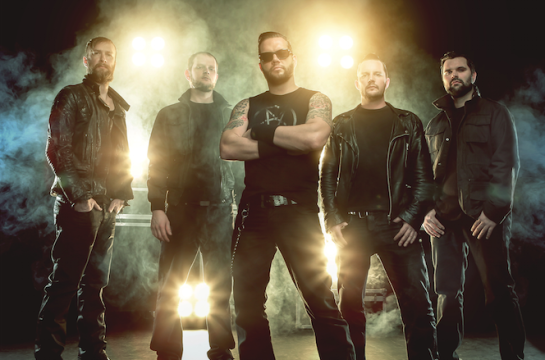 Formed in 2005 with all members hailing from the city of Antwerp, Belgium, the band is named after a CORROSION OF CONFORMITYsong and lead by notorious stand-up comedian and singer Alex Agnew. With current and ex-members of bands like A BRAND, BORN FROM PAIN and MEURIS, this eclectic five-piece quickly started to turn heads and playing shows to appreciative crowds all over Belgium and the Netherlands.

Building on groovy riffs, catchy choruses and a charismatic stage presence, DIABLO BLVD offers what made their heroes great within a wide range of influences from the heavy genre (like DANZIG, THE CULT, GUNS ‘N’ ROSES, BLACK LABEL SOCIETY and TYPE O NEGATIVE), classic rock and even blues.

After two successful full-length albums and numerous celebrated shows around Europe DIABLO BLVD went to the legendary ICP studios in Brussels with producer Ace Zec to record the brand new album Follow The Deadlights in collaboration with the American duo Jay Ruston(mix) and Paul Logus (mastering) who have previously been behind the sound of ANTHRAX, STONE SOUR, MEATLOAF and STEEL PANTHER.

Commented the band: “Everybody! We are absolutely thrilled to announce that we’re going to join the Nuclear Blast family for our first world-wide release. Signing to Nuclear Blast is like getting the hot chick everybody wants. They were our first choice when we started looking for a deal and to see it actually coming through still feels unreal. So a big thank you to everyone involved for making it happen and we hope to see you all in 2015.” – DIABLO BLVD

Follow The Deadlights is planned for release January, 2015 via Nuclear Blast.

The official lyric video for the first single off the album, ‘Rise Like Lions’, can now be streamed at this location: